STATION WAGON
In 1967 TOYOTA developed LAND CRUISER FJ55. It is LAND CRUISER 50 SERIES. It is positioned as STATION WAGON.
It was designed new body and produced as commercial-use vehicle in Japan. In overseas market it was sold as passenger vehicle. It was mounted 3.9 liter gasoline engine.

In 1989 LAND CRUISER 80 SERIES was released. It succeeded the previous series and its equipment were upgraded. It was luxury SUV. For comfortable ride, suspension were replaced leaf springs with coil springs. higher-end models also adopted a full-time 4-wheel-drive system.

In 1998 LAND CRUISER 100 SERIES was launched as the successor to the LAND CRUISER 80 SERIES. The body size was bigger than previous series. The basic four-wheel-drive performance was improved. It was getting image as a luxury 4WD vehicle. It had V8 DOHC 32-valve engine, 4-speed automatic transmission and full-time 4WD.
As the top-grade model, LAND CRUISER CYGNUS was released.

In 2007 LAND CRUISER 200 SERIES was released. It succeeded LAND CRUISER 100 SERIES. It was expanded the length and width by 60 mm and 30 mm. It featured collision safety and interior comfort. It was marketed as a high-end SUV. It has crawl control feature and Torsen LSD transfer unit.
It was mounted a 5.7 liter gasoline engine and was offered as Lexus LX, the top of the line SUV model.


HEAVY DUTY
In 1960 LAND CRUISER 40 SERIES was launched. It was very popular in the world. The chassis was the same as LAND CRUISER 20 SERIES including a soft-top. It was 2-door van. In 1967, the 4-door van was 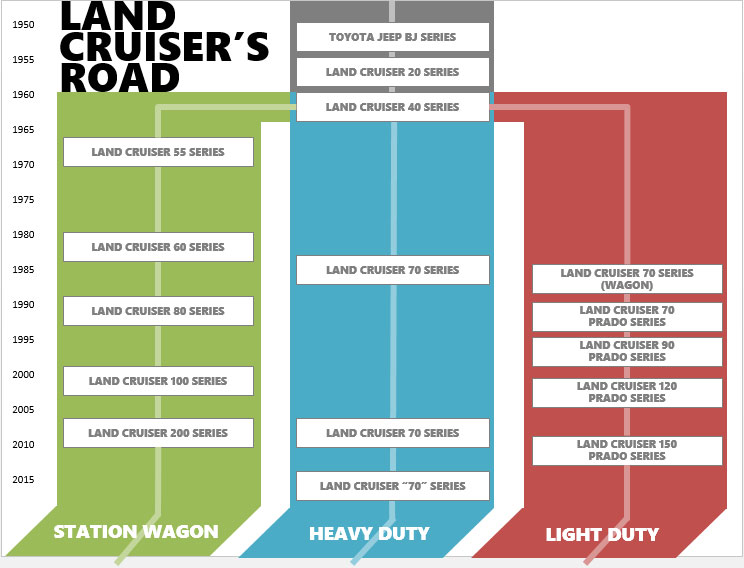 LIGHT DUTY
In 1985 LAND CRUISER LIGHT 70 AND WAGON was added its line-up. LAND CRUISER was gradually used for leisure. And it was requested comfort and style. Then TOYOTA added the wagon type.